Within the context of this DSS, the definition has been expanded to include the introduction of any liquids into a landfill. 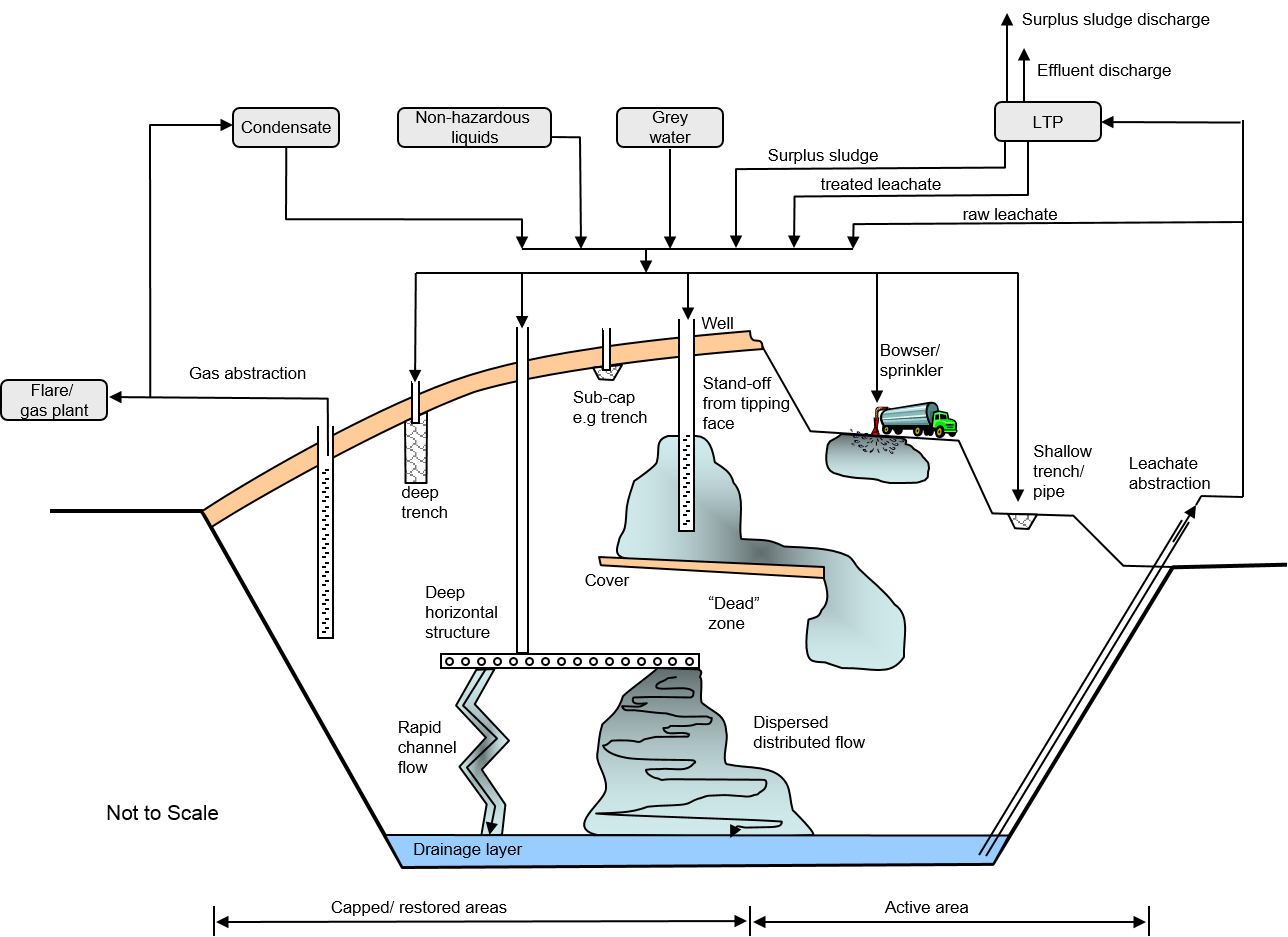 Leachate recirculation has been in use worldwide from the 1970s onwards, most often for the management of seasonal peak flows.  A resurgence in interest occurred in the USA during the 1990s and 2000s with increased interest in bioreactor landfills.  This in turn led to renewed consideration of promoting degradation by the introduction of additional liquids into landfills – a practice that had been banned in many countries during the 1980s and 1990s.

It seems likely that use of recirculation will continue, because the wide range of purposes for which it is used remains valid and it has usually caused no significant environmental problems.  The main operational and environmental issues that have to be considered are described briefly below.

Achieving even distribution of leachate into wastes, and understanding the performance and longevity of different types of infrastructure are at an early stage.  A wide range of performances have been reported, with areal application rates from 1 to 30 m3/ha/day. Some systems have accommodated very large volumes but it is unclear how long these could be sustained in the long term. The lateral zone of influence of systems, where investigated, has been found to be approximately 5 to 15 m, typically <10 m.

Understanding the flow paths that leachate will then take through the wastes is also important: the hydraulic conductivity of wastes is highly variable and the effects of heterogeneity and anisotropy can lead to short circuiting and unpredictable flow paths. Hence the properties of the waste are important and likely to evolve considerably in countries where policy is to divert much of the waste stream to pre-treatment processes.  Understanding and characterization of waste properties in the light of evolving waste management practices may help to achieve better designs.

There is little quantitative information on this problem, but clogging of injection infrastructure over a period of just a few weeks appears common when the injected leachate is acetogenic, so measures to avoid or minimize this are important.

Localised flooding of nearby gas wells has been identified as a common consequence of recirculation. Intermittent injection into leachate recirculation infrastructure appears to be the best approach to overcome these problems and is an approach used routinely by some operators, as well as being referred to in literature.

Many operators have experienced problems with failure of pipe work in horizontal pipes and radials, attributed to settlement. Settlement on most landfills will be significant, and may be enhanced in areas used for recirculation.  Some types of infrastructure may be better able to accommodate settlement (e.g. pads, band drains and surface applications) than others (e.g. some horizontal pipe systems).

No evidence has been found so far, of clogging of basal drainage layers resulting from recirculation.

On many sites the amount of leachate recirculated has been insufficient for the quantity needed for the stated aim of stimulating gas generation. This has been a common theme and is related in part to schemes not being based upon a proper conceptual design where the required recirculation volumes would be identified at an early stage.

No instances have been found where slope failure has been directly attributable to recirculation, but this remains a potential risk.  To address this risk, some operators have established a ‘no go’ zone such that no leachate would be injected within say 30m of the edge of a waste slope.

Odours, gas release and the potential for air ingress

This has been identified as a significant issue during the installation of infrastructure that involves the exposure of a significant area of waste.  An example is the placement of densely spaced bores in a band drain system, but this may also apply to other types of injection system.

Perching and surface outbreaks have been commonly observed.  They may occur due to lateral movement along layers of daily cover, or as a consequence of high pressures caused either by pressure injection or by sub-cap systems being constructed to a fall instead of horizontal.

Whilst there is a common perception that leachate recirculation could lead to deteriorating leachate quality, but there is little hard evidence to support it. Short-lived flushes of acetogenic leachate from unsaturated wastes into the collection layer may occur at the onset of recirculation, depending on the intensity of injection.

One operator provided a monitored example of recirculation lowering leachate heads at the base of the landfill, and some UK regulators have reported heads rising when recirculation is stopped. Knox and Shaw (2006) give an example in which leachate heads in a basal drainage layer rose by 2.1m in 48 days, once the leachate ‘in transit’ was allowed to collect there, following interruption of leachate extraction and recirculation.